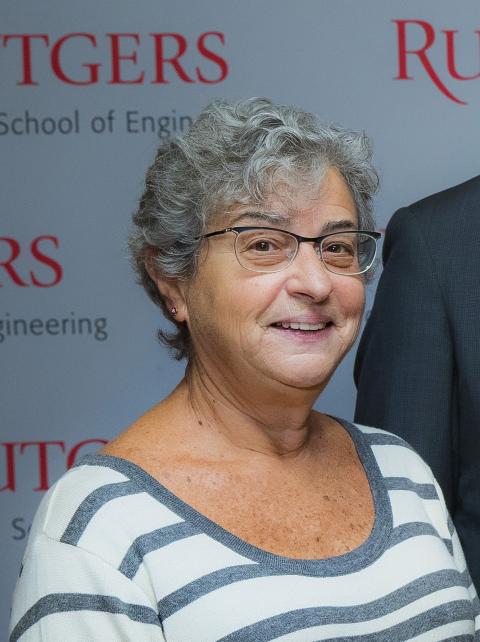 Distinguished professor of materials science and engineering (MSE) Lisa Klein has always been a trailblazer.
In 1973, she was the only woman to earn a bachelor’s degree at MIT in metallurgy. In 1977, six years after the School of Engineering accepted its first women students, she became its first female faculty member. Four years later, she was the first woman granted tenure in the School. In 1998, she was promoted to distinguished professor.
Beginning July 1, 2020, she will become the first woman chair in the 120-year history of the Department of Materials Science and Engineering.
“I am pleased to appoint Lisa Klein as chair of the Department of Materials Science and Engineering,” says School of Engineering Dean Thomas Farris. “I have relied heavily on Lisa for advice and counsel in my time at Rutgers and am confident that her leadership will help continue to move MSE and the School of Engineering forward.”
For Klein, the three-year appointment is especially meaningful in terms of the changes she has been part of. “In one sense, we think things have changed, but the truth is things change slowly,” she says. “Rutgers was not co-ed when I was applying to undergraduate schools. While it has taken 50 years of coeducation to arrive at the point my department has a female chair, it’s a sign that we are still evolving and changing.”
To prove her point, Klein recalls that in the first class she taught, there were three women out of 40 students – or less than 10%. Today, the number of women students in the MSE department has increased to around 20%.
“Nationwide, it’s known to take an effort and a lot of recruiting to move beyond 20%, which has been a priority for Dean Farris during the past ten years.” The result for the School of Engineering is that 27% of its current undergraduates and 28% of its current graduate students are women.
In announcing Klein’s appointment, Farris commends her commitment to scholarship, advocacy, and leadership. “She is a leader in the research community. Her research and scholarship in materials science, particularly sol-gel processing, is simply outstanding,” he notes. “Additionally, her leadership roles within Rutgers including support and advocacy for women in STEM has done much to advance the profile of the School of Engineering.”
Klein, who shares patents in sol-gel processing, received the 1998 Achievement Award of the Society of Women Engineers for her ground-breaking work in sol-gel processing research resulting in energy-saving coatings for windows.
Her lifelong advocacy for and encouragement of underrepresented groups, including women, minorities, and economically disadvantaged people to pursue their dreams, was recognized by Rutgers with its 2015 Human Dignity Award.
Klein is delighted that Busch campus today is a much livelier and friendly place than it was when she joined the faculty. “There’s more student life and there are more activities. There’s more diversity on campus and people come up with ideas for groups they want to join or start or projects they want to get involved with. It’s a good mixture.”
In looking ahead to her new role as MSE chair, Klein has a clearly defined mission. “All of the chairs want to stay current with technology and make sure their departments are capturing what’s new in their fields,” she says. “Engineering is inter- and multi-disciplinary and chairs need to work together as the boundaries between departments are becoming increasingly porous.”
Stressing the human side of engineering will be equally critical for Klein. “The career of an engineer will be pretty varied. After a number of years, an engineer who started out in a specific technical engineering field will often end up consulting or managing a team. It’s an important thing to remind people of,” she says.