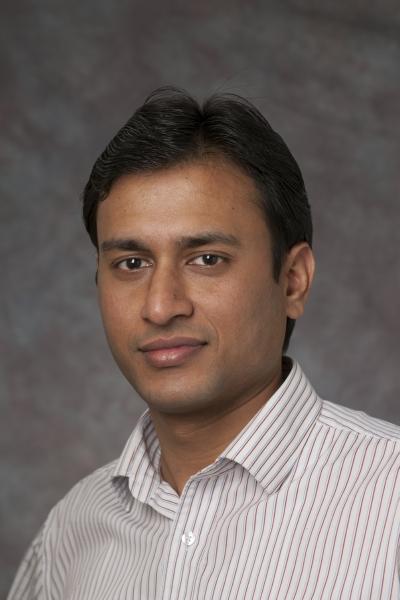 How do you handle nuclear waste that will be radioactive for millions of years, keeping it from harming people and the environment?

It isn’t easy, but Rutgers researcher Ashutosh Goel has discovered ways to immobilize such waste – the offshoot of decades of nuclear weapons production – in glass and ceramics.

Goel, an assistant professor in the Department of Materials Science and Engineering, is the primary inventor of a new method to immobilize radioactive iodine in ceramics at room temperature. He’s also the principal investigator (PI) or co-PI for six glass-related research projects totaling $6.34 million in federal and private funding, with $3.335 million going to Rutgers.

“Glass is a perfect material for immobilizing the radioactive wastes with excellent chemical durability,” said Goel, who works in the School of Engineering. Developing ways to immobilize iodine-129, which is especially troublesome, is crucial for its safe storage and disposal in underground geological formations.

The half-life of iodine-129 is 15.7 million years, and it can disperse rapidly in air and water, according to the U.S. Environmental Protection Agency. If it’s released into the environment, iodine will linger for millions of years. Iodine targets the thyroid gland and can increase the chances of getting cancer.

Among Goel’s major funders is the U.S. Department of Energy (DOE), which oversees one of the world’s largest nuclear cleanups following 45 years of producing nuclear weapons. The national weapons complex once had 16 major facilities that covered vast swaths of Idaho, Nevada, South Carolina, Tennessee and Washington state, according to the DOE.

The agency says the Hanford site in southeastern Washington, which manufactured more than 20 million pieces of uranium metal fuel for nine nuclear reactors near the Columbia River, is its biggest cleanup challenge.

Hanford plants processed 110,000 tons of fuel from the reactors. Some 56 million gallons of radioactive waste – enough to fill more than 1 million bathtubs – went to 177 large underground tanks. As many as 67 tanks – more than one third – are thought to have leaked, the DOE says. The liquids have been pumped out of the 67 tanks, leaving mostly dried solids.

The Hanford cleanup mission commenced in 1989, and construction of a waste treatment plant for the liquid radioactive waste in tanks was launched a decade later and is more than three-fifths finished.

“What we’re talking about here is highly complex, multicomponent radioactive waste which contains almost everything in the periodic table,” Goel said. “What we’re focusing on is underground and has to be immobilized.”

Goel, a native of Punjab state in northern India, earned a doctorate in glasses and glass-ceramics from the University of Aveiro in Portugal in 2009 and was a postdoctoral researcher there. He worked as a “glass scientist” at the Pacific Northwest National Laboratory in 2011 and 2012, and then as a senior scientist at Sterlite Technologies Ltd. in India before joining the Rutgers faculty in January 2014.

At the Hanford site, creating glass with radioactive waste is expected to start in around 2022 or 2023, Goel said, and “the implications of our research will be much more visible by that time.”

The research may eventually help lead to ways to safely dispose of highly radioactive spent nuclear fuel that is stored now at commercial nuclear power plants.

“It depends on its composition, how complex it is and what it contains,” Goel said. “If we know the chemical composition of the nuclear waste coming out from those plants, we can definitely work on it.”

See this story at https://www.seeker.com/simple-method-seals-nuclear-waste-for-millions-of... and